Facebook became Meta – Are we all about to jump in to the Metaverse? 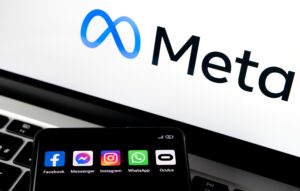 On October 28, 2021, Mark Zuckerberg wrote a founder’s letter to outline the brand’s decision to change its name to Meta, suggesting this phase as being the beginning of the next chapter for the internet. He went on to say:

“The metaverse is the next frontier in connecting people, just like social networking was when we got started,”

Facebook has made this move to pursue opportunities in the virtual world of “the metaverse”.

Adidas also joined the growing ranks of those entering the metaverse, releasing a one-of-a-kind token that functions similarly to an NFT, while Nike and Roblox collaborated on virtual realm, “Nikeland”, marking their first step into this new space.

And these are not the only big brands to see potential in this rapidly emerging technology, and how it could permanently change the way we network, shop and do business.

To most of us, Facebook is seen as a social media company, an almost iconic social media brand, but things are changing and while no-one is entirely sure exactly what the metaverse will look like, the rise of a new iteration of the Internet, Web 3.0, has meant social media is changing, and many of the original pioneers of social media are already moving into this exciting new space, and applying those hard-won lessons to these new technologies.

Having spent my entire career immersed in the world of social media, using these platforms to maximise the success and growth of businesses, it is fascinating to see how colleagues, associates and industry leaders from across the world have begun investing in both the metaverse and Web 3.0 ventures, and are already seeing seven figure returns.

Most of us consider social media as ubiquitous, but there was a time when many businesses did not view it as something worth investing in. As technology caught up and revealed huge opportunities in eCommerce, the value of a social media presence quickly became apparent, and these companies found themselves 10 steps behind their competitors – I predict this will be the case with the metaverse and Web 3.0.

Those that took the plunge into social media when it was still an emerging technology were able to build up hugely influential followings as well as create powerful brands . We are seeing the same thing happen as entrepreneurs are using the infrastructure of Web 3.0 to create and invest in emerging metaverse platforms.

Who is doing what?

We have already seen the explosion in cryptocurrency platforms, with Jack Dorsey’s financial services company, Square, investing $50 million into Bitcoin, and Tesla following suit with an investment of over $1.3 billion. Similarly, non-fungible tokens [NFTs] are rich in opportunities for businesses and investors beyond simply trading digital artworks and collectibles.

While Facebook’s name change may have bought mainstream attention to the possibilities of the metaverse, the road is already being paved by many big names who first cut their teeth on social media.

Gary Vaynerchuk, CEO of VaynerMedia, identified the Internet as a land-grab opportunity and opened one of the first eCommerce platforms in the late 90s. He essentially grew with social media, becoming a hugely prolific and influential name within the industry, and has been investing in the Metaverse for the past two years, creating and developing Vee Friends, an NFT brand company, as well as other Web 3.0 initiatives.

Other early-adopters of social media, such as Social Chain co-founder, and youngest-ever investor on Dragon’s Den, Steven Bartlett, has also begun investing in a number of Web 3.0 companies, while social media pioneer Cathal Berragan moved from Social Chain New York to a Web 3.0 business in London.

While these are just a handful of names, all are using their significant social media followings and the skills they learnt on those platforms to make the transition into this new space.

With Web 3.0 and the metaverse poised as the successor to the current iteration of the Internet, it is those trailblazers who were able to adapt their mindset and take a leap into social media who have the greatest advantage in making the next move into the metaverse.

They already have great experience in cultivating a following and building a community and are able to bring that community on board with them into new ventures, such as those who started off running meme accounts on platforms like Twitter and transitioned to buying and creating NFTs.

The ability to communicate your message clearly on emerging platforms is something that early adopters of social media have already had much experience in, and crucially, are able to hit the relevant tone of voice as well as iterating their content style to keep and engage their audience. People that were willing to take a risk by investing their time into new platforms such as TikTok or Snapchat, staking their claim in these new spaces, and it is these people who are now reaping the benefits of being at the frontier of the metaverse.

Read more:
Facebook became Meta – Are we all about to jump in to the Metaverse?