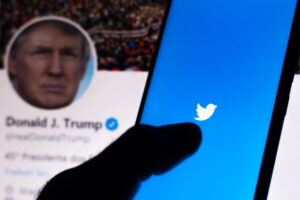 Elon Musk has said he will reverse Twitter’s ban on the former US president Donald Trump if the Tesla boss completes a takeover of the social media platform.

Twitter permanently banned Trump in January 2021, citing repeated violations of company rules and its judgment that his tweets were “highly likely to encourage and inspire people to replicate the criminal acts that took place at the US Capitol on 6 January 2021”, referring to the attack on the building by his supporters.

Musk, the world’s richest man because of his stake in the electric car company Tesla, revealed his initial stake in New York-listed Twitter on 4 April, and agreed to a $44bn (£36bn) deal on 25 April after several weeks of rapid negotiations.

“I would reverse the permanent ban,” Musk said on Tuesday, speaking via video link at a car industry conference organised by the Financial Times.

“I do think it was not correct to ban Donald Trump,” he said. “I think that was a mistake. It alienated the country and did not result in Donald Trump not having a voice.

“I think it was a morally bad decision and foolish in the extreme.”

The Twitter co-founder and former CEO, Jack Dorsey, echoed Musk in a Tuesday tweet, saying “generally permanent bans are a failure of ours and don’t work”.

Trump has stated publicly that he would not return to Twitter even if he were allowed to, preferring instead the Truth Social network founded under his name. However, Trump did not start posting on the struggling platform beyond an initial introductory message until May – nearly two and half months after its launch.

Many of Trump’s political opponents believe he would be unlikely to pass up the opportunity to broadcast to Twitter’s much larger audience.

A return would potentially give Trump a larger platform to influence the next US presidential election in 2024, either as a candidate or as a kingmaker among Republican candidates.

Musk also reiterated criticisms that Twitter’s staff are too leftwing, saying they were influenced by being headquartered in San Francisco, regarded as one of the most liberal cities in the US . Twitter is “coming out of an environment that is very far left”, he said.

“Twitter needs to be much more even-handed,” he said. “It’s currently left-biased.”

He also said the Twitter takeover would be completed in a “best-case scenario” only within the next two or three months. “It is for me not a done deal,” he said.