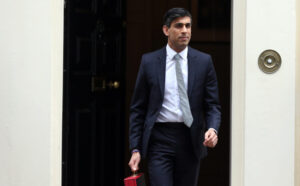 The government is “urgently” exploring a windfall tax on electricity companies within weeks, Rishi Sunak has said, extending the Treasury’s £5 billion energy tax raid to cushion the cost of living blow for struggling households.

The chancellor told MPs on the Treasury committee that electricity companies were racking up “extraordinary profits” on the back of a global oil and gas price surge that has driven up UK household bills by more than 50 per cent this year.

“We are working urgently with the industry to understand the scale of what those [profits] might be and the best way to address that,” Sunak said.

He has already announced a windfall tax of 65 per cent on North Sea oil and gas company profits, up from 40 per cent, that will raise an additional £5 billion in the next 12 months. The revenues will help to fund a £15 billion package of support measures for the households struggling with higher energy costs and surging inflation.

The electricity windfall levy would help to raise cash to pay for the cost of living measures, which include a £400 one-off payment per household to reduce energy bills this autumn and £1,200 for the poorest families. Sunak did not say how much the expanded tax could generate but rejected a £10 billion estimate.

Yesterday the chancellor denied suggestions that the announcement of the package was being used to direct attention away from the fallout of the Sue Gray report.

Rushanara Ali, a Labour MP on the Treasury committee, asked Sunak if he had come under pressure to announce the package last month.

The chancellor said: “No. The way the price cap works, there is an observation window from February to August. We couldn’t do it for the spring statement because the observation window had barely opened, so anything could have the potential to be very wrongly sized. I have always said I want to strike the right balance about reassurance to people and waiting for enough information to ensure it is appropriate. There is no perfect time but we had to do it.”

He also denied that there had been pressure from the regulator Ofgem, and said he felt informed after receiving weekly estimates of the potential price cap increase in October.

The Treasury is consulting electricity companies about the scale of the excess profits they are making before announcing the tax, Sunak said.

UK electricity prices are set by a marginal pricing system where the most expensive form of energy, in this case wholesale natural gas, sets the clearing price for the sector.

Sunak said the government was working on longer-term reforms to change the pricing rules, following in the wake of the likes of Portugal and Spain, which have announced price caps to protect the poorest households.

“People’s energy bills are being driven by the way the pricing system works, which means the costs for producing electricity bears no relation to what customers are paying. That is something we should try and fix, other countries are taking those steps. There are different ways of doing that, but I think that is the right approach.”

The chancellor defended his profits levy in the face of criticism from parts of the energy sector that have said it will ward off investment in North Sea oil and gas.

Sunak said the levy created the “right balance” between fairly taxing excess profits and providing investment incentives. He said the tax was temporary and would fall away after three years or earlier if oil prices fell back to an average historical range between $60 and $70 for Brent crude.

Oil prices stand at $120 per barrel at present.

“Windfall taxes are not a knee-jerk response and I am pragmatic about their use,” Sunak said. “We took the time to design a levy that is not a blunt instrument, which has incentives to invest.”