Talks to avert rail shutdown in Britain set to continue 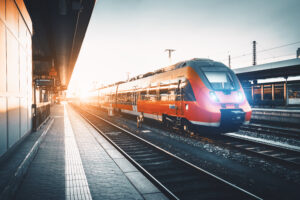 More talks will be held this week between unions and rail industry leaders in an attempt to avoid a week of national strikes that will shut down much of Britain’s rail network in late June.

Passengers whose journeys were affected would receive refunds for tickets they had bought, the Rail Delivery Group, which represents train companies, pledged.

Rail workers belonging to the Rail, Maritime and Transport (RMT) union will stage walkouts on 21, 23 and 25 June, with the effects likely to disrupt many services through days where workers are not on strike.

The government has called the strikes “self-defeating”, saying they could drive more passengers away in the long term.

Network Rail is drawing up contingency plans to enable some services to run on main lines. The strikes, which will include most of its signalling staff as well as the onboard and station staff of 13 train companies, are expected to leave fewer than one in five services running, probably only between 7am and 7pm on main lines.

Network Rail’s chief executive, Andrew Haines, said the organisation was doing everything it could to avoid the strike action. “There are two weeks until the first strike is planned. We will use this time to keep talking to our unions and, through compromise and common sense on both sides, we hope to find a solution and avoid the damage that strike action would cause all involved,” he said.

The RMT said it would be open to “meaningful proposals” that would guarantee no compulsory redundancies and address pay.

Rail firms promised to be “very flexible” with customers who had bought tickets for the week of the strikes. “If we cannot provide a service to our customers due to strike action then we will refund customers,” said Steve Montgomery, the chair of the Rail Delivery Group (RDG). “We need to go and draw up a set of guidance for people and how it is going to work but we will be very flexible.”

In the Commons, Boris Johnson described the strikes as “reckless and wanton”.

The prime minister’s spokesperson also said strikes would “drive people away from using the railways at a time when we are already seeing numbers down on pre-pandemic levels.

“It is a self-defeating approach, which will do lasting damage to not just the railways but to rail workers.”

The Tory MP Huw Merriman, the chair of the Commons transport select committee, urged the government to legislate. He told the BBC: “It was proposed in the Conservative party’s manifesto in 2019 that there would be a minimum service obligation so that trains would have to run, as they do in France, Italy, Spain, during strikes, where a third to a fifth of trains operate.”

However, Downing Street said while it was still “committed to” introducing minimum service rules, there were no plans to legislate in the next few weeks.

The spokesperson said: “Given the scale of these strikes that are imposed, simply introducing one single piece of legislation would not necessarily mitigate against all the damage.”

The planned industrial action – after a ballot of 40,000 members across Network Rail and 13 train operating companies last month – is due to start on Tuesday 21 June and run on alternating days until the Saturday.

It will take place during a week of large cultural events, including Glastonbury festival, the UK athletics championships in Manchester, and a concert in London’s Hyde Park by the Rolling Stones, as well as two parliamentary byelections.

Compulsory redundancies among rail workers have not yet been threatened by either Network Rail or train operators, but as passenger numbers remain stubbornly below pre-Covid levels, companies are looking for up to £2bn in annual savings.

Many rail workers had their wages frozen during the pandemic, and have not yet been offered a pay rise, with inflation at its highest for decades.

About 10,000 RMT members working for London Underground will also strike on 21 June, in a parallel dispute over jobs and pensions, bringing the network to a halt. The Unite union on Tuesday announced that about 1,000 members at Transport for London, including some tube staff, would stage a 24-hour walkout the same day, intensifying disruption.