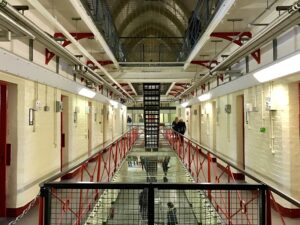 The Digital Poverty Alliance and Intel have partnered with Trailblazers Mentoring Charity to launch “Tech4PrisonLeavers”, a scheme which provides young ex-offenders with access to technology and digital skills.

The campaign is set to provide a group of 25 men leaving Her Majesty’s Young Offender’s Institution at Brinsford prison in Wolverhampton with devices, connectivity, skills and mentoring in order to give them better access to employment opportunities and life skills upon release.

The scheme is aimed at men only, as they make up a vastly disproportionate amount of the prison population in the UK at nearly 95 per cent. Furthermore, multiple studies have shown that re-entry into society is far more challenging for young male adults, and this group is repeatedly forgotten about, and not equipped with enough support after leaving prison.

In fact, previous research highlighted that 40 per cent of young men released from prison into the community do not have access to education or training, whilst 47 per cent are without access to the internet.

The scheme, brought to life by $150,000 of funding from Intel, will provide dedicated support for young people within their first year of leaving prison. The impact of the project will then be evaluated by the Institute for Community Research and Development at the University of Wolverhampton.

Following the scheme, Digital Poverty Alliance will share their findings with the Government in order to showcase the impact of tackling digital poverty, observing factors such as re-offending rates, with a view to a wider roll out program in future.

The Digital Poverty Alliance are also working with a coalition of partners, including Vodafone, CGI, Nacro, iDEA, Capgemini and We Are Digital. Together they will be providing practical assistance through devices, data, training and mentorship.

Elizabeth Anderson, COO at Digital Poverty Alliance, said: “There are currently 6,500 people who leave prison every year and the re-offending rate for young people in the 18-25 age bracket is 38.4 per cent. We believe that by tackling digital poverty among this cohort we can help people get back on their feet and move forwards. We are proud to partner with Trailblazers and our coalition of supporting organisations to offer support to this group of young people.”

Julia Alexander, Acting CEO at Trailblazers Mentoring Charity, added: “This project will allow us to continue offering ‘through the gate’ support, ongoing practical support and volunteer mentoring in the community for up to 12 months post-release.”

“We already saw in our previous work that re-offending rates for Trailblazers mentees is 8 per cent within one year of release and 10 per cent withing two years, verses a nation rate of 25.7 per cent in the first year of release for male offenders. We hope to further reduce these figures by reconnecting male offenders with the tools and support they need to be reintroduced to society.”

Amanda Hughes, Governor HMP & YOI Brinsford, concluded: “Our priority is to successfully resettle young adults in the best possible way to prevent further re-offending. Digital technology is a key part of day-to-day living, it is important that this group are not left behind. This is an excellent initiative that we are delighted to be part of.”