Petrol stations to be investigated by watchdog over surging prices 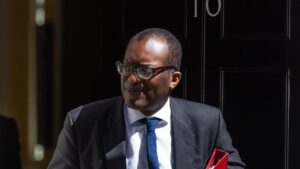 The competition watchdog has been told to carry out an “urgent review” of the fuel industry amid concerns that retailers are not passing on the 5p cut in duty to motorists.

Kwasi Kwarteng, the business and energy secretary, has written to the Competition and Markets Authority (CMA) days after the cost of fuel set records.

The average price of petrol hit 183.1p a litre last week and diesel 188.8p a litre, according to Experian Catalist, the data company. It means that, for the first time, filling an average 55-litre family car costs more than £100. Figures today are expected to show that prices rose further over the weekend.

In his letter to Dr Andrea Coscelli, chief executive of the CMA, Kwarteng says there is “widespread concern about the pace of the increase in prices at the forecourt”.

The watchdog has been told to make recommendations on how to strengthen competition and transparency on prices in the retail fuel market. It must present an initial report by July 7.

The move has been welcomed by motoring groups, although experts are calling for a further cut in duty.

Jack Cousens, head of roads policy for the AA, said: “We are pleased that the CMA has been tasked to report on the cost of fuel. However, more urgent action is needed. To relieve pressure at the pumps we need an immediate 10p cut to fuel duty. That would help restore some balance.”

Sir John Redwood, the Conservative former cabinet minister, has also called for an urgent cut in VAT. “The chancellor needs to limit the amount he plunders from us at the pumps,” he said.

Polling by AA Financial Services found that 40 per cent of drivers are exploring ways to reduce costs by switching by changing vehicles. The proportion rose to 50 per cent among drivers under 35.

The poll found that of those considering switching vehicles, nearly half planned to switch to more economical cars, with a third specifically considering an electric vehicle or one with lower taxes. About a fifth were planning to switch to a car that was less likely to break down, and 15 per cent were planning a switch from a new car to a used one.

“What people want from their cars versus what they need has been brought into sharp focus by recent cost hikes,” James Fairclough, the chief executive of AA Financial Services, told media.

“The car is a key part of a household’s finances and in times like this many are thinking clearly in terms of ‘need to have’ as opposed to ‘nice to have’. Saving money, lowering taxes and charges and reducing fuel consumption are absolute priorities both at the moment and in coming months.”

Last week a BP garage on the A1 near Sunderland was selling a litre of unleaded and diesel for 202.9p and 204.9p respectively. A Gulf garage in Essex and a forecourt on the M6 in Cumbria were also charging more than £2 a litre.

Last night the Liberal Democrats said the fuel duty cut should be raised in rural areas to 10p to help people who are more reliant on the cars.

The party claimed that households in rural areas had transport costs of £114 a week, almost £40 more than those in urban areas.

It means that rural households are shelling out almost £2,000 more a year on transport. Tim Farron, the Lib Dem rural affairs spokesman, said: “People in rural communities are bearing the brunt of devastating fuel price hikes, yet the Conservative government is refusing to lift a finger to help. Instead ministers have overseen a steady decline in rural bus services that has left people even more dependent on their cars to get around.”

Louise Haigh, the shadow transport secretary, accused the government of spending too much time “tearing themselves apart” instead of tackling the “brutal price hikes facing working people”. She said: “Motorists are being taken for a ride, and this hapless government is too distracted to do anything about it. The Conservative government needs to tackle the brutal petrol hikes and support Labour’s call to put money back in the pockets of working people with an emergency budget.”

Read more:
Petrol stations to be investigated by watchdog over surging prices