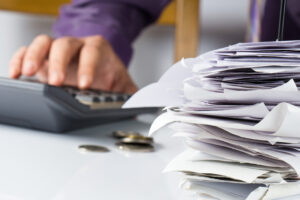 A Treasury minister has warned employees not to expect their wages to rise along with the soaring rate of inflation.

Simon Clarke said that big increases in salaries to meet the rising cost of living could end up in a 1970s style “inflationary spiral”.

This happens when wage rises help push up the cost of living.

But unions said that energy prices, not wages, were driving up the cost of living.

Mr Clarke said that employers should be “very careful” in setting pay rises that help drive up the cost of living.

He warned that inflation could become a “self-fulfilling prophecy”.

Inflation measures an overall increase in prices over time. For example, if a loaf of bread costs £1 one year and £1.09 the next year, then that’s an annual inflation rate of 9%.

On Thursday the Bank of England said that inflation could reach more than 11%.

In a survey of more than 4,000 people, 82% said they thought their wages should increase to match the rising price of goods and services.

But Mr Clarke, who is chief secretary to the Treasury, said that “unrealistic expectations around pay” could “intensify this endless inflation problem”.

However, the Trades Union Congress (TUC) said: “Energy prices are pushing up inflation – not wages.”

“The government has cynically abandoned its commitment to a high-wage economy.

“The only way to give families long-term financial security is to get pay rising across the economy.

“British workers are suffering the longest wage squeeze in more than 200 hours years. They urgently need more money in their pockets.”

The public sector pay review bodies are due to report in the coming weeks on the level of increase for workers – including employees in health, schools and prisons.

Unions are pressing to have the pay increases reflect the rising cost of living.

Mr Clarke is the Treasury minister in charge of the pay review body process.

His comments are the clearest steer that public sector workers in general will not get settlements close to the current rate of inflation.

Unison general secretary Christina McAnea said: “Ministers must realise the damage that will be done to public services if health, care, police and school staff don’t receive a decent pay rise this year.

“Without one that protects against rising prices, many will quit for better paid and less stressful work elsewhere, leaving the public struggling to access vital services.”

The independent bodies have begun to report back to relevant government departments about appropriate pay and recruitment difficulties.

The Treasury says those departments will have to find the cash from existing budgets for any pay rises above what is already planned.

Mr Clarke said there was no automatic link between inflation and pay setting and that inflation could “run away from us”.

Earlier this week, the ONS said that regular pay is falling at the fastest rate in more than a decade when taking into account rising prices.

Between February and April, pay excluding bonuses was down 2.2% from a year earlier when adjusted for inflation, according to the ONS.

However, pay including bonuses is outpacing price rises, rising by 0.4% when taking inflation into account.