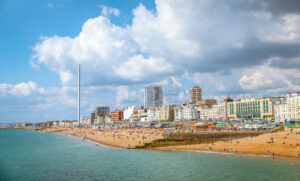 Brighton will become the first city in the UK to take action against second homeowners and holiday lets after a wave of buyers during the coronavirus pandemic pushed house prices to over £500,000.

Councillors have voted to ask officials to draw up proposals which will ban new-build second homes and holiday lets in some areas of East Sussex.

It comes after a Brighton and Hove City Council report found that more than 3,000 properties in the city could be being used as short-term holiday lets.

The proposals are similar to those already in place in Whitby, where out of towners are banned from buying new builds, which has sparked a quiet revolution among seaside towns from Lyme Regis, Salcombe and Falmouth to Tideswell and even St Ives.

Residents in the fishing port on the Yorkshire coast turned out in their droves last week and won a landslide 93 per cent vote to stop new builds being sold to rich Londoners amid mounting fears that families are being priced out of the housing market.

Amanda Evans, a Labour Councillor, claims that a similar ban in Brighton is necessary as younger people cannot afford to live in the city.

‘Younger employees at the council are moving out to Worthing because they can’t afford to live in Brighton,’ she said.

She told local newspaper The Argus that 75 per cent of properties in the Edward Street Quarter, a new development, had already been sold off ‘for outrageously high prices’ before the development was completed.

‘I bet they’re not being bought by people who are going to live in them themselves,’ she added.

Marianna Ebel, a Green Party Councillor, claimed there are thousands of residents on a housing waiting list, which is exacerbated by people purchasing second homes.

‘When flats and houses are used for short-term holiday lets and second homes, it not only reduces the number of housing units but causes massive problems for neighbours, such as anti-social behaviour,’ she told the BBC.

According to Rightmove, the average property in Brighton and Hove costs £473,000. Terraced houses cost around £531,000 which a semi-detached property will fetch £544,000.

The property website says property prices have risen 14 per cent on their pre-pandemic level of £414,000.

If introduced, the ban would make Brighton and Hove the first city to adopt the approach.

In Whitby 2,111 people voted in favour of a ban on outsiders purchasing second homes and only 157 against, with 18 ballot papers rejected or spoiled.

The ban, which is subject to a public consultation in September, will stop people from buying new homes and plots in the area except as their main residence.

If approved by Scarborough Borough Council, which controls planning in Whitby, it could be in place by the end of the year.

Seething locals say Whitby has been swamped with holiday cottages – sending local house price sky high. Many of the properties are bought by people from the Home Counties with little or no links to the area.

Local businesses cannot get staff because the area is too expensive to attract new people while existing residents are forced to buy elsewhere.

Campaigner and local politician Philip Trumper said: ‘It’s becoming a theme park, basically. And that’s something that we don’t want to happen. I think we’re at a tipping point.

‘What we are finding is Whitby house prices are unaffordable to local people and they are having to leave the town and move away to work, making it unsustainable for the community.

‘Every day I speak to local people whose loved ones have had to move away and find a job closer to where they are living.’

A similar ban was brought in in St Ives in in northern Cornwall in 2016 but the jury is still out on whether it has helped because house prices have remained high.

The new house ban has also seen new developments pop up outside restricted areas of the town.

Falmouth town councillor Jayne Kirkham said that the people of Cornwall, Devon, Cumbria, the Peak District and Wales will all have been watching the result of the Whitby referendum with ‘great interest’, and if successful, there could be more public votes.

She said that Cornwall has enough holiday lets and second homes than to house all 22,000 people on the area’s waiting list – and the Government must devolve more powers to the county so they can clamp down on the issue.

‘We have a real crisis in Cornwall and we need more control over planning rules,’ she said.

‘Too much of the power is in the Government’s hands. They can solve this problem. But we need a suite of powers, not just a ban on second home owners buying new builds.

‘In Wales they are doubling or even trebling council tax, a council tax loophole for second homes has not been properly closed and in Scotland there is a register of holiday lets and Airbnbs. We need that here.

‘The people of Whitby will need to do more things to solve the problem’.

In Wales, tourism leaders have reacted with horror to confirmation of new occupancy rules for second homes and holiday lets.

From April 1, 2023, the Welsh Government will insist that self-catering properties are let for at least 182 days each year in a move critics say will ‘decimate’ the Welsh tourism industry. At the moment lets only have to pay the cheaper business rate if they are used for 70 days. But from next year they need to let them out for at least 182 days or will have to pay more expensive council tax.

Holiday lettings firm Finest Retreats, which promotes 29 holiday cottages in Wales, warned the challenging occupancy target will hit rural economies the hardest by driving up prices and making the country a ‘less attractive place to visit’.

Ashford Price of The National Showcaves Centre for Wales said: ‘I have a huge amount of sympathy with what’s happened in Whitby. I believe that Welsh people have the right to live in Welsh homes, built by the Welsh, for the Welsh.

‘The Welsh Government’s launched a big crackdown on second homes which means that, from next April, holiday homes have to be let out for more than 182 days a year. This means that a great number of self-catering businesses are going to be absolutely clobbered by the new rules. Some experts have said up to 1,400 businesses could go under, and thousands could lose their job.

‘So all of a sudden, these lovely homes in idyllic parts of Wales are going to go on the market, going to become available, and who do you think they’re going to be bought by? Not by the Welsh, who will then be out of work and poor. No, it will be from wealthy English people with money to spare who want to make an investment.’

One resident of Lyme Regis, Dorset, said they must push for similar ban to avoid becoming a ‘zombie town’ in Winter. Meanwhile architect and Kent coast resident Matt Hayes said that Whitstable – the top destination for second homeowners in the South East – could ‘consider’ backing its own ban on ‘outsiders’, ‘given the plethora of Airbnb key safes you see dotted about’.

In the Peak District, mother Sharon Bates was reduced to tears at a council meeting as she claimed holidaymakers had forced house prices up so much that her sons had to leave Tideswell in Derbyshire, where her family has lived for four generations.

She said: ‘My husband and I were both born and bred in Tideswell, our two children were also born and brought up in Tideswell. It’s only in recent years that they’ve moved away due to not being able to afford property in the village. The park is a beautiful place to live and it makes me sad that our children and other children don’t have the opportunity to stay here. Most properties end up as holiday cottages.’