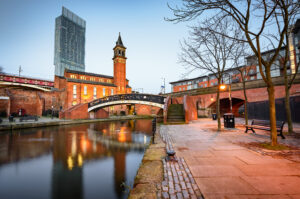 Poor home insulation and greater car dependency means inflation is up to 30% higher in northern English cities than it is in London, according to a new report.

The Centre for Cities thinktank said a study of cities in England and Wales showed the north-south cost of living divide was intensifying regional inequality.

The report showed eight out of the 10 cities with the highest energy costs were in the the north, the Midlands and Wales, where workers faced being £340 a year worse off than their counterparts in the south.

Older, less well-insulated housing stock and higher motoring costs in cities with worse public transport than London and the south-east meant local inflation rates of 11% in Blackpool and Blackburn, and 10.9% in Bradford. In the Midlands, Leicester’s inflation rate was 10.8%, slightly higher than the 10.7% for Swansea in Wales.

Andrew Carter, the Centre for Cities chief executive, said the inflation gap between north and south highlighted the need for Boris Johnson’s successor to stick to the prime minister’s levelling-up agenda.

“The entire country has been impacted by the cost of living crisis but our research clearly shows some areas are being hit much harder than others. Worryingly, the north, Midlands and Wales are struggling with higher rates of inflation that are further squeezing finances and leaving their residents hundreds of pounds worse off.

“These disparities prove that levelling up our cities to tackle spatial inequalities and future proof the economy is more important than ever.

“In the short-term it is imperative that those most vulnerable are given the support they need to get through this crisis. Even while Westminster’s political situation is uncertain, ministers must act quickly to protect the areas most impacted and ensure they don’t fall even further behind.”

In May, the then chancellor Rishi Sunak announced a £15bn package to help ease the cost of living crisis but the thinktank said more needed to be done to support vulnerable households. It called for benefits to be increased in line with inflation, the temporary £20 a week uplift to Universal Credit announced at the start of the pandemic to be reintroduced and one-off payments for those in poorly insulated homes to help with energy bills.