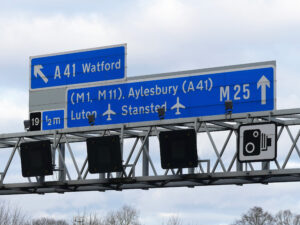 Climate activists climbed gantries on the M25 and declared the motorway a “site of civil resistance” as they pledged to block it for two days.

Just Stop Oil protesters at junction 10 eastbound near Cobham, Surrey, said they were stopping traffic as part of planned action between Wednesday and Friday.

The group said more activists were on their way as a nine-mile tailback formed on the motorway anti-clockwise. The National Highways website warned people to expect delays of more than an hour.

In a video shared from a gantry near junction 14, west of Heathrow, two unnamed young activists said they “did not want to be here” but that it was “what we must do”. Protesters were also reported between junction 30 and the Queen Elizabeth II bridge, near Dartford.

Just Stop Oil said: “We’ve just seen 40-degree temperatures, which have been predicted for decades, maybe it’s happening a bit faster, but it has just revealed how inadequate the government’s preparations for climate change are and their entire policy, and basically, we’re just saying, it’s evident now we cannot continue.”

The group is calling for the government to make a “meaningful statement” that it will commit to stop licensing the exploration, development and production of fossil fuels in the UK, which they say is “the necessary first step to ensuring a liveable future”.

It said: “We ask that no one travels on this motorway from Wednesday to Friday this week as we will be blocking the highway. We fully acknowledge the cost and disruption this will cause to the public and ask that they take their demands for compensation to the government, which has caused this unprecedented threat to our lives and liberties.”

Motorists expressed frustration over the delays. Ashley Reid, a minibus driver who was taking five autistic children to their last day of school, called the protesters “idiots”. “I am not against the protests but I am against the methods,” he said “Why should the children on my bus have to sit on the motorway for over an hour, confused, angry and upset, so that this point can be made?”

A travel alert said: “There are delays of over an hour on the M25 anti-clockwise in Surrey due to an ongoing Surrey police-led incident within J10 (for A3, Guildford). Three lanes (of four) are currently closed.

“If this incident impacts on your planned route, please allow extra journey time as there is over nine miles of congestion on approach. Plan ahead, you may wish to re-route or even delay your journey.”

Surrey police said officers were dealing with the protest. Police have been given new powers to arrest protesters on national infrastructure sites as part of the Police and Crime Bill, which allows prison sentences of up to 12 months for those who “interfere with key national infrastructure” such as airports, printing presses or motorways.