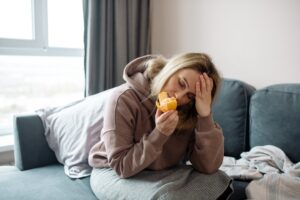 Long Covid is costing the UK up to £1.5bn a year in lost earnings, researchers say, after the number of people suffering persistent symptoms of the virus doubled over the last 12 months.

The Institute for Fiscal Studies (IFS) said the impact of a rise in long Covid cases from 1 to 2 million showed it was likely to be “a significant part of the pandemic’s legacy”.

Using data from the Office for National Statistics (ONS), the IFS said about 110,000 of the 2 million sufferers – who must report symptoms for at least three months – were signed off sick, with the loss 4.4m working hours a week.

On average, those who stop work because of long Covid would be losing £1,100 a month in earnings, adding up to a total loss of income of almost £1.5bn a year, though employers that pay to cover sick leave would pick up some of the tab.

Tom Wernham, a research economist at the IFS and an author of the report, said it was clear from the study that “for a significant minority of long Covid sufferers, the condition has severe effects not only on their health but on their ability to do paid work”.

He said the impact would be felt most by low-income families and workers with pre-existing health problems that made them vulnerable to the virus.

“Compared to those without long Covid, those who are suffering from the condition were, pre-pandemic, more likely to be claiming benefits (41% versus 28%), be in poverty (25% versus 19%) and live in social housing (25% versus 17%),” the report said.

“While previous research has shown that women, those with pre-existing medical conditions and those in poorer parts of the country were more likely to be hit, this is the first evidence showing that long Covid is more prevalent among deprived individuals,” it added.

Wernham said a rising rate of long-term sufferers “could therefore put additional strain on families during the cost of living crisis, especially as long Covid is more common among poorer families”.

The report added that long Covid can be long lasting, forcing workers to take off at least three months after infection and perhaps longer.

“This could imply significant consequences for some individuals, especially those without savings or a working partner,” it said.

The report said that working with raw data from the ONS meant it was difficult to capture some of the changing medical effects of Covid and how it reacts to vaccines, leading it to call for more research to determine the long-term impact of the disease.

While there is evidence of sufferers still missing from work at least three months after infection, the report said, by the six-month mark the effects are considerably smaller and most people have returned to work.