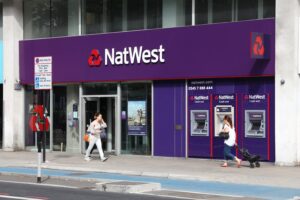 NatWest is to return £2.1 billion to shareholders and has revealed a surprise increase in profits despite worries about Britain’s inflation-fuelled cost of living crisis.

The high street bank said it had been buoyed by rising interest rates during the first six months of the year, which helped its revenues to climb to £6.2 billion from £5.1 billion in 2021.

Pre-tax operating profits in the period climbed to £2.6 billion, up from £2.3 billion a year earlier and surpassing City analysts’ expectations of a fall to £2.2 billion.

In a further fillip for investors, the lender also announced a bumper cash return. It will hand back £364 million through a 3.5p-a-share ordinary interim dividend, and then a further £1.75 billion by way of a special payout of 16.8p per share and a share consolidation.

A big proportion of this cash will go to the government, which still owns 48 per cent of the bank following its state bailout at the height of the 2007-08 financial crisis when the lender, then called Royal Bank of Scotland, received a £45.5 billion taxpayer rescue to avert a collapse.

The figures follow better-than-expected results and an increased dividend from rival Lloyds Banking Group on Wednesday. Lloyds too had benefited from rising borrowing costs.

The Bank of England and other central banks around the world are racing to lift interest rates as they attempt to rein in soaring inflation, which in the UK is at a 40-year high of 9.4 per cent, putting mounting pressure on households.

However, this rapid tightening of monetary policy is boosting commercial lenders, which for years have wrestled with borrowing costs at record lows. NatWest’s net interest margin, a closely watched measure that reflects the difference between what it charges for loans and what it pays to depositors, was 2.72 per cent in the second quarter, up from 2.35 per cent a year earlier.

Yet rising interest rates potentially pose a double-edged sword for banks, because they are increasing pressure on borrowers at the same time as living standards are being severely squeezed by inflation.

Alison Rose, NatWest’s chief executive, said: “We know that continued increases in the cost of living are impacting people, families and businesses across the UK, and we have put in place a range of targeted measures to support those likely to need it most. Our strong levels of profitability and capital generation mean we are well positioned to provide this support.”

NatWest is one of Britain’s biggest high street banks and has been led by Rose for almost three years.

Joseph Dickerson, an analyst at Jefferies, said NatWest had enjoyed a “very strong” second quarter. Shares in the bank were up 16p, or 7 per cent, to 246p in early trading.